The parapharyngeal space (PPS) is a three-dimensional inverted pyramid-shaped area, extending superiorly from the skull base to the greater cornu of the hyoid bone, inferiorly.

The styloid process, tensor veli palatini muscle and fascia stretching between, separate it in the pre-styloid and post-styloid compartment. The pre-styloid space is mainly occupied by the deep lobe of the parotid gland; the post-styloid compartment contains neurovascular structures within the carotid sheath, as IX, X, XI and XII cranial nerves, the cervical sympathetic chain, the internal jugular vein, and the internal carotid artery. Primary tumours of the PPS are very rare, constituting approximately 0.5–1.5% of all head and neck tumors (1-4). The majority are benign neoplasm (80%) and pleomorphic adenoma is the most common, followed by neurogenic tumors (2,5). Patients clinical presentation usually depend on extension of tumour. Contrast-enhanced MRI represents the gold standard radiological imaging. It provides information regarding size, extension and relationship with neurovascular structures. FNAC is the investigation towards the diagnosis which can be undertaken with hystopatological evaluation after surgical treatment.

Routinely, PPS tumors are removed through the transcervical approach. Recently, several surgical minimal invasive approaches to PPS have been described, employing endoscopic and robotic assistance via transnasal and transoral windows (6-9).

In the present study we describe a case of a carcinosarcoma of the deep lobe of the parotid gland resected via an endoscopic-assisted transcervical approach.

All procedures performed in studies involving human participants were in accordance with the ethical standards of the institutional and/or national research committee(s) and with the Helsinki Declaration (as revised in 2013). Written informed consent was obtained from the patient.

An 81-year-old woman was referred to us for a persistence of right PPS tumor after radiation therapy, performed in another medical center. A PPS mass was found incidentally, and a contrast-enhanced CT scan revealed a dishomogeneous hypointense mass (5.6×4.2×3.2 cm3), extending to the PPS, mimicking a salivary gland abscess, with calcification in the peripheral portion of the sub-mandibular gland. The patient underwent a FNAC that was consistent with angiosarcoma. The medical team treating the patient proposed a surgical approach, but the patient refused. Therefore she was referred to radiotherapy. Her medical history included previous ovarian carcinoma (treated with ovariectomy and adjuvant chemotherapy), and hyperthyroidism. She referred no pain, no skin ulcer and no problems in swelling. At the moment of our examination, a right sub-mandibular mass, fixed to surrounding tissues, was palpable. Contrast-enhanced MRI after radiation therapy showed the increasing mass (6×4.5×3.6 cm3), with dishomogeneous contrast enhancement, compressing the lateral pharyngeal wall, without signs of infiltration (Figure 1). No enlarged cervical nodes were observed. Positive emission tomography (with 18-FDG) revealed a pathological signal in the right PPS (Figure 2). No distant metastases were found. 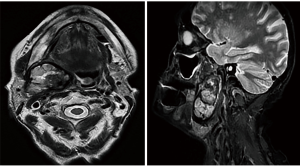 After a multidisciplinary tumor board discussion, we proposed surgical treatment via an endoscopic-assisted transcervical approach.

A sub-mandibular skin incision, 8 cm in its length and 2 to 3 cm inferior to the lower border of the mandible, was made through the platysma muscle. A sub-platysmal superior flap was elevated. The marginal mandibular branch of the facial nerve was isolated and preserved, monitoring its function during the dissection with the aid of an hand-held nerve stimulator (Neuropacer®; FIAB SpA, Florence, Italy). The sub-mandibular was identified and removed, in order to widen the surgical field. Dissection from the anterior border of the sternocleidomastoid muscle and the posterior belly of the digastric muscle was performed. The spinal nerve was exposed and preserved; the posterior belly of digastric muscle and stylohyoid muscle were identified and divided. The surgical plane was easily dissected under endoscopic view (4 mm, 0 degrees rigid scope; KARL STORZ SE & Co. KG, Tuttlingen, Germany). Extracapsular separation of the tumor was performed to free the mass from the surrounding tissues. The tumor was completely isolated and removed, using blunt dissection and careful bipolar cautery. A matter of debate is the use of extracapsular dissection for malignant lesions. We didn’t perform parotidectomy cause imaging revealed an extraglandular mass. Lingual nerve, adjacent to the mass, was isolated and preserved (Figure 3). Tumor size was 6×5×3 cm3. Surgical procedure lasted three hours .Histopathological findings were consistent with carcinosarcoma of salivary glands, with chondro-sarcomatous and post radiation therapy necrosis components. No intra-, peri- or post-operative neurovascular complications were evaluated and the patient was discharged after three days. Six months later the patient underwent a contrast-enhanced MRI. No loco-regional relapse was found. 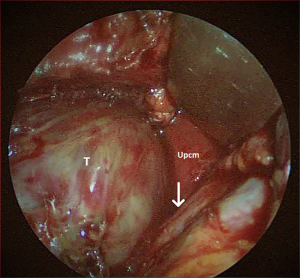 Primary tumors of the PPS are very rare, comprising approximately 0.5–1.5% of all head and neck tumors (1-4). The majority are benign (80%), the most common being pleomorphic adenoma of the parotid gland, followed by neurogenic tumors (5,10-12). Salivary gland tumors are predominantly found in the prestyloid compartment, whereas neurogenic tumors typically occupy the poststyloid compartment (2). Dysphagia is the primary complaint of prestyloid tumors; poststyloid tumors are often asymptomatic, but functional impairment in one or more of the cranial nerves may be observed. Contrast-enhanced CT and MRI are the standard radiological investigation for PPS tumors. In our case, we preferred an MRI scan to obtain optimal visualization of the extension of the pathology and tissue infiltration, after cervical radiation treatment.

Carcinosarcoma of the salivary gland is an aggressive malignant tumor, composed of a mixture of carcinomatous and sarcomatous components, that represents less than 0.2% of all malignant salivary gland tumors (13). Three types of mixed malignant salivary gland tumors can be described: carcinosarcoma ex pleomorphic adenoma, metastasizing pleomorphic adenoma, and carcinosarcoma de novo (14-16). Although most malignant mixed tumors contain a benign and a malignant component, the carcinosarcoma is composed of a mixture of carcinomatous and sarcomatous components. So it can be truly considered a malignant mixed tumor. Other cases have reported cells of chondrosarcoma, fibrosarcoma, leiomyosarcoma, osteosarcoma and malignant fibrous histiocytoma (17,18). Two-thirds of these tumors arise in the parotid gland. They have been described as clinically aggressive, with local recurrence and metastasis observed in up to 50% of patients. A mean survival range of 29.3 months to 43.2 months has been reported in prior studies (14,17).

Routinely, PPS tumors are removed through transcervical approaches, which have limited capability to expose the upper portion of the PPS. Thus, blind dissection may curtail risk of tumor rupture, cranial nerve damage and bleeding. Sometimes, combined approaches are required, such as a trans-parotid, trans-mandibular approach with lip incision and mandibular split, that increases morbidity and risk of neurovascular injury. Recently, several minimally invasive surgical approaches to PPS have been described, employing endoscopic and robotic assistance via transnasal and transoral windows. Recently, preauricular approach to PPS is described for treating benign neoplasm, but also controversial in lesions within the parapharyngeal space (19).

Regardless of the surgical technique, potential complications of resecting PPS tumors are various: hemorrhage, cranial nerve injury (VII, IX, X, XI, XII), tumor spillage, Horner Syndrome and stroke (20). Due to its deep position, with complex neurovascular anatomy, the endoscopic-assisted approach has evolved as an acceptable technique for the treatment of PPS tumors, seeking to reduce injury to vital structures, while preserving functioning as well as cosmetic results (21). In our experience, the use of the endoscope improved magnification and allowed dissection of the tumor from adjacent neurovascular structures. No intra- peri- and post-operative complications were recorded.

The endoscopic-assisted transcervical approach to PPS is an acceptable technique for treating PPS tumors invading the middle and upper PPS, or large tumors requiring more invasive, combined approaches, which may include transmandibular or infratemporal fossa approaches, typically associated with considerable morbidity. High magnification allows good visualization and the possibility of tumor removal, while reducing neurovascular injuries and tumor spillage. Tumor removal is safe, with minimal morbidity and excellent functional outcomes.

Conflicts of Interest: All authors have completed the ICMJE uniform disclosure form (available at http://dx.doi.org/10.21037/fomm-20-82). The authors have no conflicts of interest to declare.

Ethical Statement: The authors are accountable for all aspects of the work in ensuring that questions related to the accuracy or integrity of any part of the work are appropriately investigated and resolved. All procedures performed in studies involving human participants were in accordance with the ethical standards of the institutional and/or national research committee(s) and with the Helsinki Declaration (as revised in 2013). Written informed consent was obtained from the patient.