Corynebacterium striatum: post-operative wound infection in a patient with oral squamous cell carcinoma—report of a case and literature review

Corynebacterium species are widely distributed in the environment and in the microbiota of humans and animals. Medically relevant Corynebacterium species include Corynebacterium diphtheria, the primary cause of diphtheria, and the non-diphtherial corynebacteria, collectively referred to as diphtheroids. Non-diphtherial corynebacteria (C. striatum, C. amycolatum, C. minutissimum, C. xerosis and C. freneyi) were originally thought to be contaminants as they are part of the normal flora of the skin and mucous membranes. Corynebacterium striatum is recognized as a true pathogen when isolated in several samples from sterile body sites or from indwelling medical devices (1). A variety of infections have been associated with this bacterium, this includes bacteremia, endocarditis, valvular damage, meningitis, vaginitis and infections of the urinary tract, the respiratory tract, wounds, skin and the eye (2-4). Although initial studies indicated that C. striatum clinical isolates were susceptible to a wide range of antibiotics (5), recent reports have shown increased multidrug resistance (6). In this study, we report a case of C. striatum associated postoperative wound infection in patient suffering from oral squamous cell carcinoma.

A 56-year-old male presented at the Department of Oral & Maxillofacial-Head & Neck Oncology at Ninth Peoples’ Hospital, School of Medicine, Shanghai Jiao Tong University, Shanghai, China in the month of December 2017, with painful slowly progressive mass of the left floor of the mouth of 6 months duration. Clinical examination revealed a 3 cm × 3 cm, exogenous cauliflower-like mass in the left mouth floor. On palpation, lesion is of firm to hard without clear boundary, there was no associated pain. Cervical lymph node examination showed a 2 cm × 2 cm, medium hardness node, non-painful enlarged lymph node with good mobility in the left submental area was also noted. The CT scan revealed a 3 cm × 3 cm, high-density mass without clear boundary in the left month floor and a 2 cm × 2 cm mass in the left submental area (Figure 1). He was diagnosed with squamous cell carcinoma of left mouth floor with left cervical lymph node metastasis (T2N1M0). Patient was a known diabetic and hypertensive and is well controlled on oral drugs. 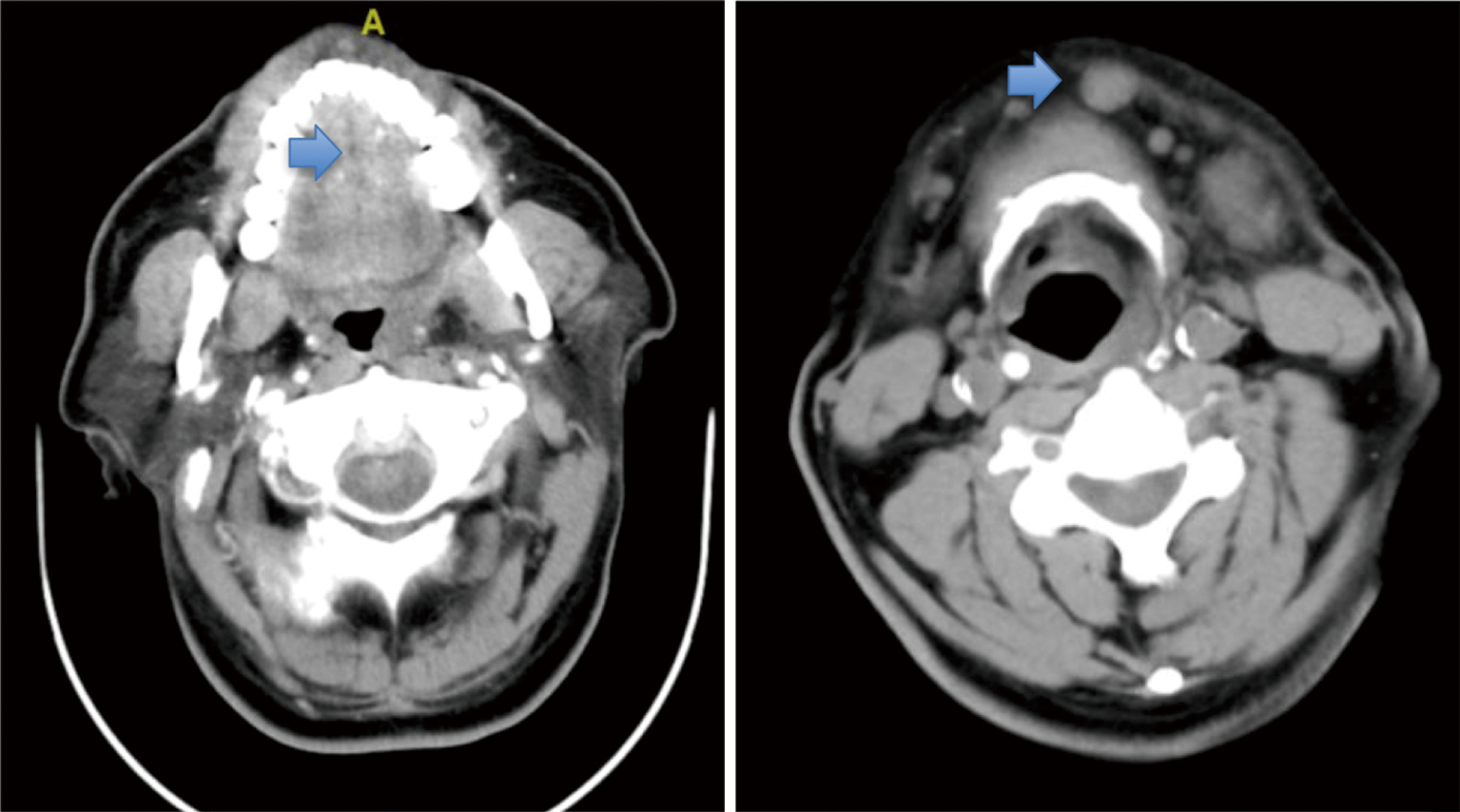 The preoperative examinations and investigations reported no contraindication to general anesthesia. He underwent extensive resection of mass in the mouth floor, marginal mandibulectomy, left radical neck dissection, right supraomohyoid neck dissection and tracheostomy on December 15th 2017. The frozen biopsy confirmed the diagnosis of squamous cell carcinoma and the marginal examinations were negative. After the surgery, the patient was transferred to the intensive care unit (ICU) for post-operative care. Two days later, the patient’s general condition was stable and he was returned to the surgical ward of the department. During the ICU stay, there was no clinical evidence of wound infection as his cervical wound did not appear significantly swollen and there was no wound dehiscence in the floor of the mouth. Post operatively, patient was placed on intravenous cefoxitin sodium (2 g twice 12 hourly) for 5 days. However, Complete blood count and differentials showed high white blood cell count (17.7×109/L) on the second post-operative day. Despite medications, the result of every two days’ complete blood count showed persistent high count of white blood cells. On the seventh post-operative day, we noticed some yellow fluid leak from the wound margin. Some sutures were removed to allow for drainage and copious pus discharge was noticed. We opened the wound and wash it twice daily with chloramphenicol solution. Nevertheless, the infective process did not subside after five days of conservative management (Figure 2). On December 27th 2017, patient was returned to the operating room for a secondary procedure (Figure 3). He had surgical debridement of the mouth floor, partial mandibular resection and reconstruction with pectoralis major myocutaneous flap (PMMF). After the surgery, he was transferred back to the ward for post-operative care. Also, pus samples were sent to the Department of Microbiology for culture and sensitivity. Gram-staining of the sample revealed gram-positive bacilli and it was confirmed as Corynebacter striatum using the automated system (VITEK-MS, Biomerieux, France) with ANC card. According to the sensitivity result, intravenous meropenem (500 mg 8 hourly) and tinidazole (500 mg 12 hourly) were administered for 5 days. We also carried out a routine complete blood count every three days to monitor the white blood cell count. Patient was discharged home on January 22th 2018.

Figure 2 The infective process did not subside after five days of conservative management. 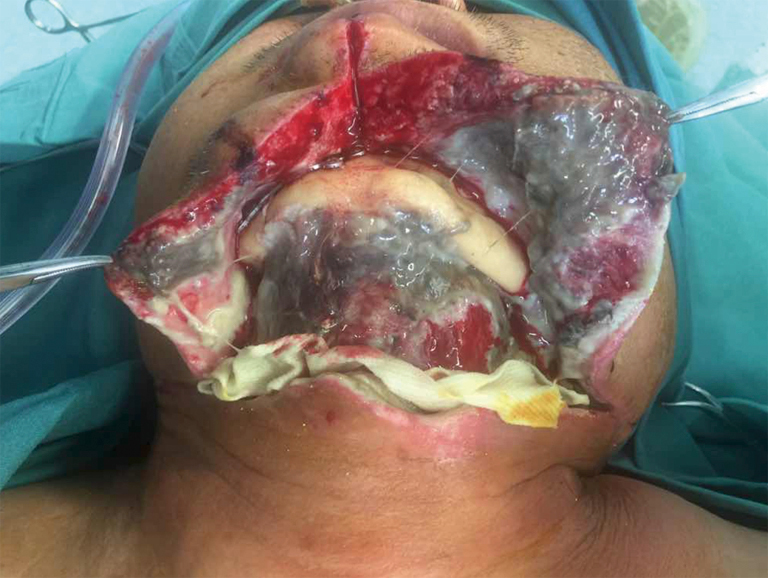 Figure 3 The patient was returned to the operating room for a secondary procedure.

C. striatum is a normal commensal of the skin and mucous membranes. The majority of cases of C. striatum infection are often hospital-acquired as post-operative wound infections and a few reports on systemic infections (infection confirmed by isolation of C. striatum from a sterile site) are available. However, most of these cases are seen in patients with implanted indwelling devices or who present with immunosuppression (7). Our patient is a known diabetic, hypertensive with good control, however, disease burden of the oral SCC and the stress of the surgical intervention are factors that probably increased the patient’s susceptibility to C. striatum infection.

Postoperative wound infections still represent the most common hospital acquired infection and they are the most important cause of post-operative morbidity. Wound infection is the most common infective process after surgery (38%), and often require antibiotic therapy and may increase the length of hospital stay thereby increasing medical cost (8). In this study, we report a case of C. striatum associated postoperative wound infection in a patient been surgically managed for oral squamous cell carcinoma. Although most reported C. striatum isolates are susceptible to a wide range of antibiotics, it has been suggested that the selective pressure exerted by previous antimicrobial treatment has contributed to the overgrowth of C. striatum, leading to it becoming a secondary colonizer in immunocompromised hosts. C. striatum is therefore being recently reported as a multidrug-resistant pathogen causing long standing open wound infection. Although it has been suggested that initial therapies of suspected cases should include vancomycin, because in vitro resistance to vancomycin has not been reported in any of the Corynebacterium species (2), the infection in this patient was only sensitive to meropenem and tinidazole.

Diabetes mellitus is a known immune compromising condition even when controlled. Hyperglycemia activates protein kinase C, and this inhibits neutrophil migration, phagocytosis, superoxide production and microbial killing. In a recent review, Jafar et al. noted that acute hyperglycemia can significantly alter innate immune responses to infection, this clinical condition is not uncommon in the immediate post-operative period in a known diabetic (9). To the best of knowledge, this is the first report of C. striatum associated postoperative wound infection in patient suffering from oral squamous cell carcinoma. In this case, high index of suspicion, timely diagnosis of C. striatum infection, radical debridement, and prompt treatment with intravenous meropenem and tinidazole resulted in favourable outcome in this patient.

C. striatum is a nosocomial opportunistic pathogen and has been reported that are associated with a variety of infections: bacteremia, endocarditis, valvular damage, meningitis, vaginitis and infections of the urinary tract, the respiratory tract, wounds, skin and eye. This case highlights the emerging importance of C. striatum as a nosocomial pathogen. Fortunately, accurate diagnosis of the infection and prompt management helped in a favourable outcome for the patient.

Funding: This study was supported by research grant 81602370 from National Natural Science Foundation of China.

Conflicts of Interest: All authors have completed the ICMJE uniform disclosure form (available at http://dx.doi.org/10.21037/fomm-20-20). The authors have no conflicts of interest to declare.

Ethical Statement: The authors are accountable for all aspects of the work in ensuring that questions related to the accuracy or integrity of any part of the work are appropriately investigated and resolved. The informed consent form (version 1.1) was approved by the Ninth Peoples’ Hospital, Shanghai Jiaotong University School of Medicine {approval number [2016]105}. Written informed consent was obtained from the patient for publication of this case report and any accompanying images.