A boy, born with a large lump in the left side of the neck, presented to our hospital 5 days later on January 29, 2018 (Figure 1). Physical examination revealed that the left neck mass was raised above the surrounding skin with an unclear boundary by naked eye. There was no pain upon pressure, and the skin temperature was normal. Pulsation was not obvious, and there was no rupture or infection. The child experienced difficulty in breathing and made a snoring sound while sleeping. Ultrasound examination revealed a cystic mass under the skin and multiple sections without obvious blood flow signals. The lymphatic malformations were approximately 8.0 cm × 8.0 cm × 3.6 cm in size (Figure 2). The child weighed 3 kg and was too young for surgery and the polycystic lesion located in the neck had the potential to affect breathing; hence, we considered sclerotherapy as a treatment option. The injectable drugs included lauromacrogol foam and triamcinolone acetonide. Lauromacrogol solution (1%) and air were quickly mixed in a 1:4 ratio to make foam using the Tessari method (8). Triamcinolone acetonide was diluted to 13.3 mg/mL with 2 mL of 0.9% normal saline. A small amount of lauromacrogol foam and triamcinolone acetonide was injected in multiple areas using the double-needle method. Two 4.5# scalp needles were placed above and below a certain area to inject each sclerosing agent. The cystic fluid and a small amount of sclerosing agent was taken out. A faint yellow clear liquid was extracted from multiple points in the cyst. Cytological examination revealed the presence of many mature lymphocytes in the liquids; no pathological cells were found. Another two rounds of treatment, each treatments with an interval of 3 weeks, did not have a satisfactory effect and the sac fluid gradually became dark red. 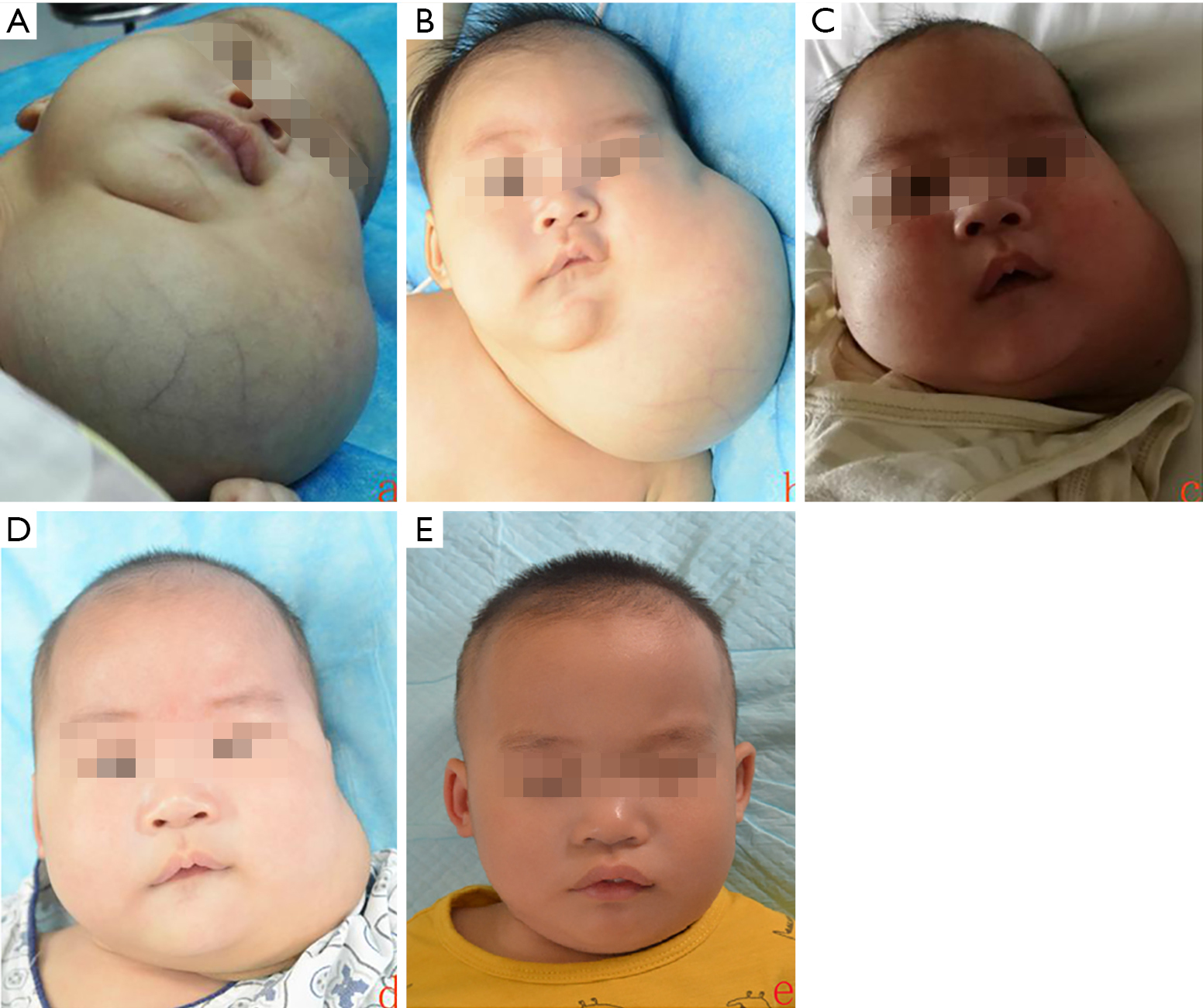 By April 8, 2018, when the child was 2.5 months old, the size of the lesion has increased to 11.5 cm × 12.0 cm × 7.7 cm (Figure 1B) and the child’s body weight was 4.5 kg. Pingyangmycin was added at the fourth treatment. Pingyangmycin was diluted with 4 mL of 0.9% normal saline and 2 mL multipoint injections were given. After a small dose of the sclerosing agent into cavity, it was washed with a small amount of 0.9% normal saline and was inserted from above and removed from below to reduce excess drug in the capsule and reduce side effects. For this procedure, 330 mL of cyst fluid was removed (Figure 3). Figure 4 shows the double-needle injection method used during the operation. After the operation, the child was transferred to the pediatric intensive medicine department at our hospital. The child’s postoperative condition remained stable and no special treatment was given. The child was discharged after 3 days post-operation. During the 1-month treatment interval for pingyangmycin (9), and the child was closely followed up. During the follow up, the condition of the child was stable and the size of the lesion had significantly reduced. On April 22, 2018, the child was re-examined (Figure 1C) and the previous treatment procedure was repeated. After the operation, the child was again transferred to the pediatric intensive medicine department for 1 day. The child’s postoperative condition was stable and was discharged without any special treatment. On May 29, 2018, the child was re-examined (Figure 1D), and the ultrasound examination showed a lesion of about 7.5 cm × 9.0 cm × 5.12 cm in size (Figure 2B). The treatment plan was continued as described above.

Figure 3 A total of 330 mL dark red sac fluid was extracted during surgery. 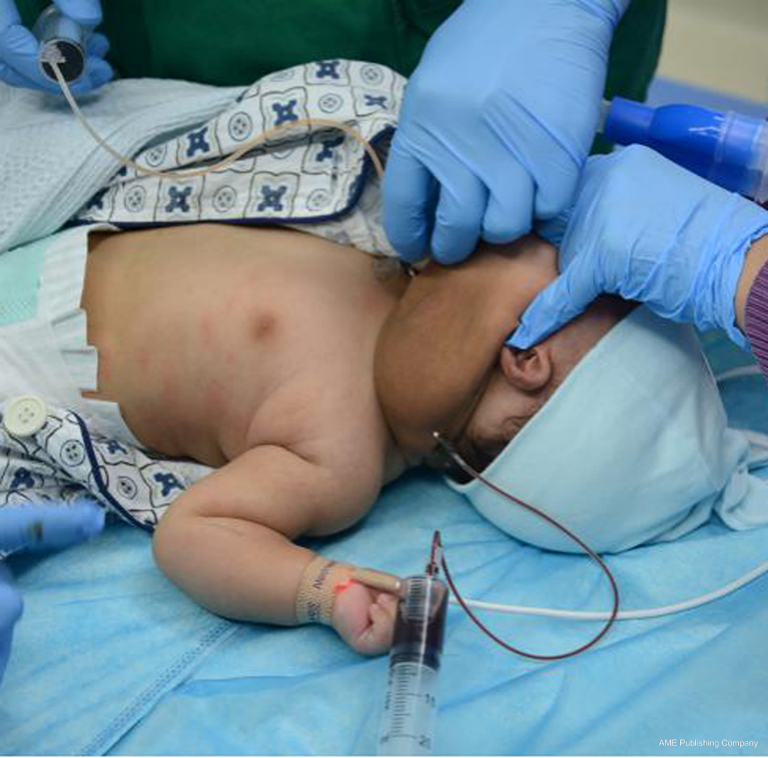 We would like to thank Dr. Qi Hengtao from the Ultrasound Diagnosis Laboratory of Shandong Medical Imaging Research Institute for the imaging data. We are grateful for the surgical and nursing support provided by the Department of Anesthesiology and Pediatric Intensive Care Unit of Shandong Provincial Hospital affiliated to Shandong University.

Conflicts of Interest: All authors have completed the ICMJE uniform disclosure form (available at http://dx.doi.org/10.21037/fomm.2019.09.01). The authors have no conflicts of interest to declare.

Ethical Statement: The authors are accountable for all aspects of the work in ensuring that questions related to the accuracy or integrity of any part of the work are appropriately investigated and resolved. All procedures performed in studies involving human participants were in accordance with the Declaration of Helsinki (as revised in 2013).Written informed consent was obtained from the patient for publication of this manuscript and any accompanying images.