Periodontal disease is one of the main reasons for tooth loss (1). The main goals of current periodontal therapies are to preserve the natural dentition, as well as the esthetics and function of the periodontium (2,3). However, none of the therapies are currently available have shown the ability to completely restore the functionality of all damaged periodontal tissues. Regenerative medicine has certain advantages compared with traditional treatment because it uses tissue engineering and stem cells. Stem cells have high proliferation capacity and multipotent differentiation potential to repair and reconstruct damaged periodontal tissue (4,5).

However, the use of hPDLSCs is often limited, because primary hPDLSCs, in vitro, possess a relatively short replicative lifespan and undergo senescence after several passages (9,10). Therefore, it is necessary to establish a continuous periodontal ligament stem cell line to provide a consistent and homogeneous research cell model.

All procedures were carried out in accordance with The Code of Ethics of the World Medical Association (Declaration of Helsinki) for experiments involving human subjects.

Premolars extracted for orthodontic reasons were collected from a 12-year-old donor at the Oral Surgery Clinic of the Ninth People’s Hospital affiliated to Shanghai Jiao Tong University School of Medicine (China), with the written informed consent of the patient’s parents. The periodontal ligament was gently separated from the surface of the root and cultured using a modified tissue piece method (7), then the human periodontal ligament cells (hPDLCs) in P2 were isolated by immune magnetic beads separation (beads coated with the antibody of STRO-1) according to the manufacturer's instructions (Miltenyi Biotec, Germany).

The expression of mesenchymal stem cell surface markers was detected with flow cytometry. hPDLSCs were cultured until they reached 80–90% confluency, and then were detached using a 0.05% trypsin-EDTA solution, washed with PBS and incubated in the dark for 15 min at 4 °C with fluorescence-conjugated monoclonal antibodies for CD73-PE, CD90-FITC, CD105-PE, CD166-PE, CD34-PE, and CD45-FITC (BD Biosciences, Franklin Lakes, NJ, USA). These markers were recommended by the International Society of Cellular Therapy to confirm the mesenchymal phenotype of cells (21). After labeling and washing, cells were fixed in 1% (w/v) paraformaldehyde for 20–30 min, air-dried at 4 °C, sorted using a FACS Calibur flow cytometer and analyzed with FlowJo software (version 7.6.1, Treestar, Ashland, OR, USA). Non-specific fluorescence was measured using specific isotype monoclonal antibodies (BD Biosciences).

Packaging plasmid PLKO.1 and enveloping plasmid Δ8.9, together with vector pBABE-hygro-hTERT (Addgene, Cambridge, MA, USA) coding for the hTERT gene were used. Production of recombinant hTERT lentivirus was achieved by transfecting HEK293T cells (provided by the Laboratory of the Chinese Academy of Biochemistry and Cell Biology). Supernatant containing viral particles was collected at 24, 48 and 72 h after transfection. For infection of cells, hPDLSCs at 70–80% confluency were exposed to viral supernatant for 24 h, after which the infected cells were selected by culturing in Dulbecco’s modified eagle medium (DMEM, Gibco-BRL, Life Technology, Inc., Grand Island, New York, USA) with hygromycin (25 µg/mL). The selected cells, named hPDLSCs-hTERT, have since been cultured for more than 49 passages. To confirm immortalization and odontoblastic differentiation of the hPDLSCs-hTERT, hPDLSCs-hTERT at passage 49 were used for the following characterization.

To test the stem cells characteristics of hPDLSCs-hTERT (passage 49), the expression of mesenchymal stem cell surface markers was detected with flow cytometry. The markers and protocols were the same as the flow cytometry done with hPDLSCs mentioned above. Furthermore, hPDLSCs-hTERT in passage 49 were cultured in six-well plates at an initial density of 5×105 cells/well in DMEM. After 24 h, the medium was replaced with human mesenchymal stem cell osteogenic/adipogenic differentiation medium (Cyagen Biosciences Inc, Guangzhou, China). At that time, the cells were defined as day 0 (0D). The medium was changed every three days. On day 21 (21D), Alizarin red stain or oil red O was performed to confirm odontoblastic/adipogenic differentiation.

To verify whether the hTERT gene was successfully transferred into the hPDLSCs, total RNA isolation, first-strand cDNA synthesis, and PCR processes were performed as reported previously (22); the primer sequences are shown in Table 1. PCR products were separated with agarose gel electrophoresis and observed under UV light.

To quantify the expression of the odontoblastic markers dentin sialophosphoprotein (DSPP), dentin matrix protein-1 (DMP1), alkaline phosphatase (ALP), and osteomodulin (OMD) in the hPDLSCs-hTERT (passage 49) before after osteogenic/odontogenic induction, total RNA was isolated from cells using TRIzol Reagent (Invitrogen, Carlsbad, CA, USA). Reverse transcription to cDNA and PCR amplification were then carried out as described previously (23). Primer sequences are shown in Table 1.

All experiments were performed at least in triplicate and reproduced three separate times. Statistical significance was determined using the unpaired student’s t-test. Values of P<0.05 and P<0.01 were accepted as statistically significant.

Isolation and identification of hPDLSCs

The hPDLSCs were sorted by magnetic-activated cell sorting of generation P2. Cells exhibited a typical fibroblast-like spindle-shaped appearance and had clone-forming ability (Figure 1A). Alizarin red and oil red O staining assays confirmed that the sorted hPDLSCs could be induced to differentiate into osteoblasts and adipocytes (Figure 1B,C). Flow cytometry confirmed that they expressed the mesenchymal stem cell surface markers CD73, CD90, CD105, and CD166, and did not express the endothelial cell marker CD34 or the hematopoietic cell marker CD45 (Figure 1D). 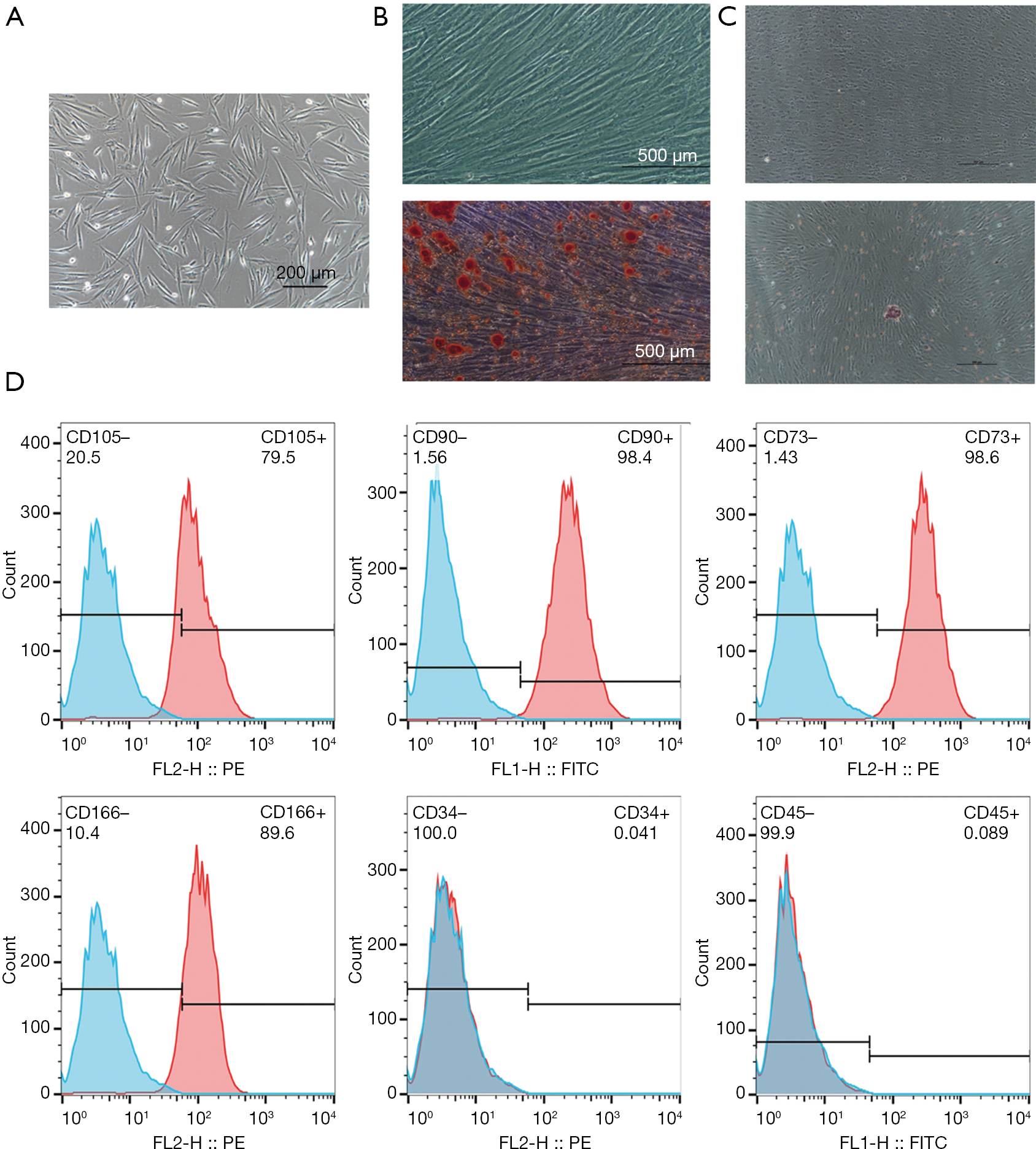 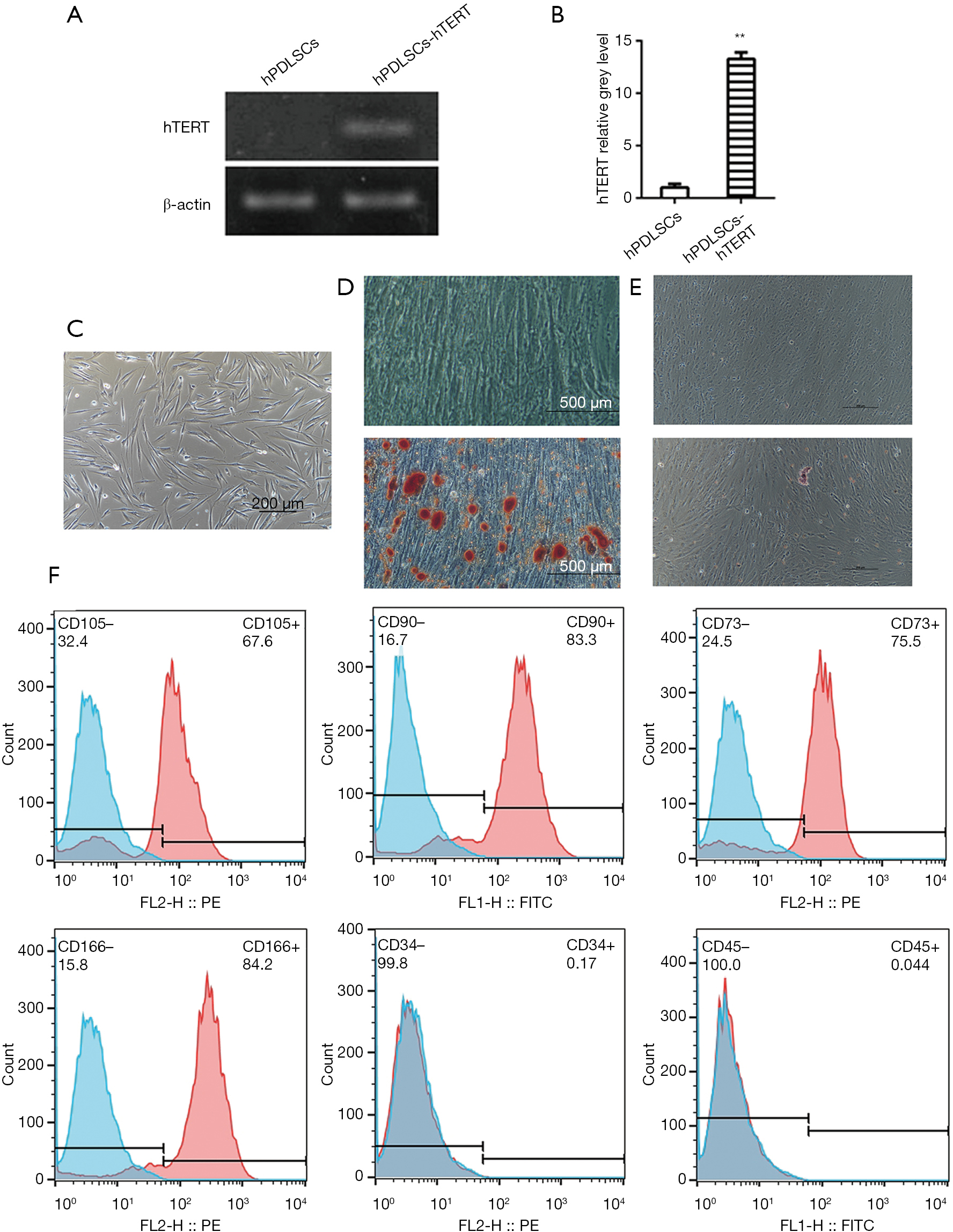 The morphologic characteristics of both hPDLSCs and hPDLSCs-hTERT appeared stable, with the majority of cells appearing spindle-shaped, with a short spindle and one to two projections, these cells had smaller volumes and central nuclei. The cells adhered to the bottom of the culture dish (Figure 2C), and were able to grow to 80–90% confluency in 3 days when passaged at a 1:4 ratio.

Osteoblastic and adipogenic differentiation of hPDLSCs-hTERT

The expression of mesenchymal stem cell surface markers by hPDLSCs-hTERT was analyzed with flow cytometry. Data showed that the same as hPDLSCs, hPDLSCs-hTERT expressed CD73, CD90, CD105, and CD166, but did not express CD34 or CD45 (Figure 2F).

After osteoblastic/odontogenic induction for 14 or 21 days, expression of the odontoblastic markers ALP, DMP1, DSPP, and OMD dramatically increased in both the hPDLSCs and hPDLSCs-hTERT (Figure 3). 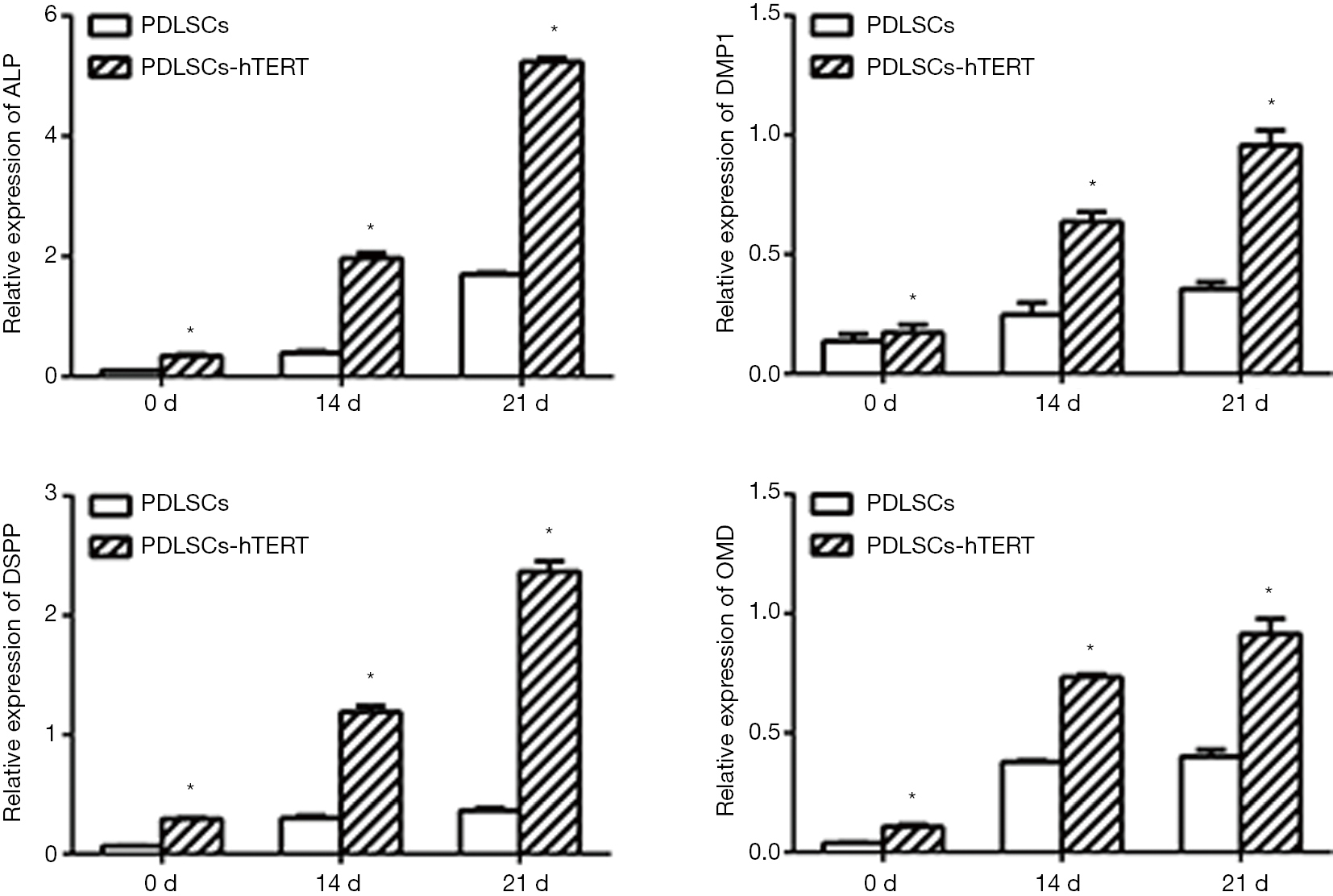 The western blotting results showed that both hPDLSCs-hTERT (passage 49) and hPDLSCs (passage 9) expressed the p53 proteins of 53 KDa (25,26). There was no significant difference between the width and color of the two bands, which demonstrated that hPDLSCs-hTERT had no carcinogenicity (Figure 4A,B).

Immortalized cells are able to avoid apoptosis and maintain their characteristic long-term morphology even after numerous passages in culture (18,19). Such cells are thus a good choice for creating a cell model to further study. hPDLSCs could be applied to periodontal regenerative medicine to promote the regeneration of damaged periodontal tissue and to restore periodontal tissue attachments (7). However, due to the aging of hPDLSCs, we need to constantly take the primary hPDLSCs from healthy orthodontic or impacted teeth, which wastes the manpower and resources. Thus, immortalized hPDLSCs could be a promising source of seed cells for periodontal tissue engineering. In this study, the exogenous hTERT gene was transferred into hPDLSCs using a lentivirus vector to extend cellular lifespan, and hence immortalize this cell line, which could make tissue regeneration based on hPDLSCs more convenient.

In this study, the cellular morphology and mesenchymal stem cell surface markers expression of hPDLSCs-hTERT remained similar to the original hPDLSCs. After the addition of human odontoblastic induction medium or human adipogenic induction medium and culture for 21 days, mineralized nodules or lipid droplets could be seen in both hPDLSCs-hTERT (Figure 2D,E) and hPDLSCs (Figure 1B,C). These results indicate that there were no obvious differences between immortalized hPDLSCs-hTERT and hPDLSCs in terms of stem cells characteristics including cell morphology, mesenchymal stem cell surface marker expression, and odontoblasts or adipocytes differentiation ability. This is consistent with previous findings that a cell line immortalized by the exogenous hTERT gene retained many biological characteristics of normal cells, such as cellular morphology, surface features, and biological functions (27,28).

Periodontal membrane is located between alveolar bone and teeth, and the stem cells in the periodontal membrane have the potential to regenerate both them (7). So the main characteristics of hPDLSCs used in tissue engineering are their osteogenic and odontoblastic ability. In most studies, the methods of osteogenic induction and odontogenic induction are the same (18-20,22,29). DSPP is a specific marker for differentiated odontoblasts, which is initially expressed in odontoblasts and hPDLSCs at the bell stage during tooth development (26). Protein encoded by DMP-1 is an ECM protein closely related to osteopontin (OPN) that is expressed by odontoblasts, osteoblasts, and osteocytes, which is critical for dentin formation and periodontal development (29). ALP and OMD are classical markers of osteogenic differentiation (19,20,30). Without odontoblastic/osteogenic induction, hPDLSCs-hTERT expressed the odontogenic-related genes DMP-1, DSPP and osteogenic-related genes ALP, OMD in a relative low level. After 14–21 days induction, the cells expressed high levels of the ALP, DMP-1, OMD and DSPP (Figure 3). These data suggest that the cell line hPDLSCs-hTERT has odontoblastic/osteogenic differentiation potential which making them an ideal seed cell line in periodontal regeneration. Furthermore, we found that the relative expressions of ALP, OMD, DMP-1 and DSPP in hPDLSCs-hTERT are higher than that in hPDLSCs among 0, 14 and 21 days after osteogenic/odontogenic induction (P<0.05). Whether hPDLSCs-hTERT have stronger odontoblastic/osteogenic differentiation potential than hPDLSCs need more experiments to verify.

One of the biggest concerns associated with the use of immortalized cells is tumorigenicity, because tumor cells also have immortal characteristics. The tumor suppressor gene, p53, which lies in the human chromosome 17p13 region, plays a role in slowing or monitoring cell division under normal conditions (26). After p53 gene mutation, cells lose the ability to regulate growth, apoptosis, and DNA repair due to conformational changes (27,28). In the present study, p53 was used to verify whether immortalized PDLSCs were tumorigenic. p53 protein expression showed no significant difference between hPDLSCs-hTERT (passage 49) and hPDLSCs (passage 9) (Figure 4), suggesting that the hPDLSCs-hTERT cell line may have low tumorigenicity.

In conclusion, a line of immortalized hPDLSCs was created in this study by transfecting the exogenous hTERT gene into hPDLSCs, which maintained stem cells’ characteristics. The resulting cell line has osteoblastic/odontoblastic differentiation potential and low tumorigenicity. This cell line could be used as a cell line for studying the periodontal tissue engineering.

Conflicts of Interest: All authors have completed the ICMJE uniform disclosure form (available at http://dx.doi.org/10.21037/fomm.2019.09.02). The authors have no conflicts of interest to declare.

Ethical Statement: The authors are accountable for all aspects of the work in ensuring that questions related to the accuracy or integrity of any part of the work are appropriately investigated and resolved. All procedures were carried out in accordance with The Code of Ethics of the World Medical Association [Declaration of Helsinki (as revised in 2013)] for experiments involving human subjects. Written informed consent was obtained from the patient’s parents.